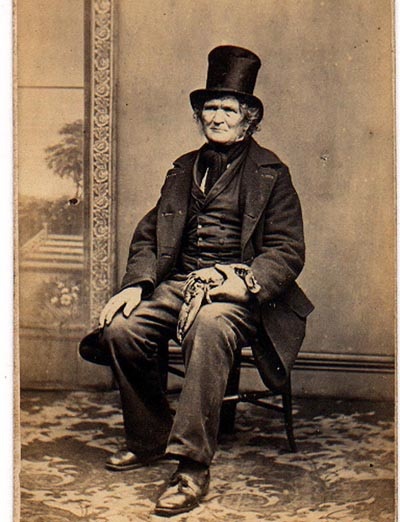 John Prance is thought to have been born in Parkham, North Devon. and certainly married Mary Braund in Parkham in 1810. He was of humble status and all efforts so far to establish his parentage have proved unsuccessful however his descendants are well documented. and include many of interest. According to his bible, which is in my possession, he fathered ten children. As his abode at Peppercombe was on the cliff's edge it is not surprising that he is pictured holding a lobster in his lap.... the sea being a major source of food for those living beside it. His children and grandchildren moved from Peppercombe, mostly into Bideford, when fierce storms at the end of the century made life impossible in such an exposed position.

Very little is known about about the life of John Prance. What we do know is that he married Mary Braund at Parkham in 1810. We know the exact date of his death from the death certificate which says he was 82. We know the manner of his death because it was written up in the local newspaper. We know where he and his family were living while he was in old age and he was described as a fisherman. All his ten children are documented in his own hand in a handsome leather bound bible. The hints that can be gleaned from his family suggest that he was an upright man of the working classes, but with some status, and whose children all did quite well for themselves.

John's birth is not recorded. However his ten children are almost the same, name for name, as those of William Prance (1765-1808) and Joanna (Lee) except in a slightly different order. Both include the name Athalia and it is my contention that this William Prance is John's father. I can't list all the evidence to support this here but it does seem that the two families are intimately linked and probably by direct line. His marriage to Mary Braund is recorded though and took place on 4/2/1810 at Parkham. He lived in Peppercombe, a steep sided valley leading down to the North Devon shore, in what his daughter-in law termed in a poem 'a rude built cottage by the sea'. In 1873 it is known that his son William and his wife Harriet with the young family of six children were still occupying this cottage. The cottage was 'below the Castle'. 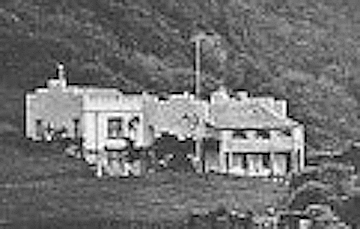 The Castle, was not a real castle but an imposing building with what looks like its own flagpole built on a rare flat piece of ground overlooking the sea. It was the property of the Lord of the Manor which at that time was the Portledge Estate. In May 1873 the family occupying the castle was John's son Joseph, Joseph's wife Susan and their six children. But about the turn of the century fierce storms eroded the cliffs and forced an abandonment of the castle and John's cottage. The above picture is taken from a postcard printed about the turn of the century however today there is nothing left of the buildings though a number of small cottages remain further up the valley. It is an enchanting spot. 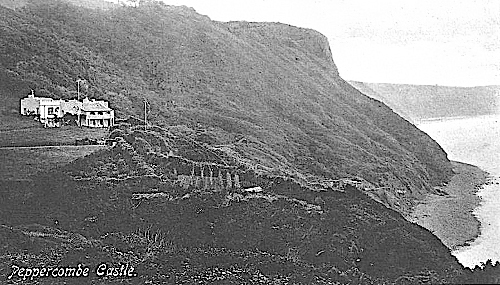 The Castle and Peppercombe beach

FATAL ACCIDENT. On Tuesday fortnight 19th ultimo, an accident occurred to a respectable old man, living at Peppercombe, near this place, called John Prance, aged 82, which had a fatal termination ten days afterwards. The cottage in which the deceased lived is the nearest to the cliff; and on the evening of the 19th he went up from his home towards the Castle and in his way gathered a few nuts for his grandchildren. Returning towards home, he took upon his shoulder a small branch of a tree which was lying in the road, and in passing a part of the road which overhangs the cliff that branch caught in the hedge and threw him off his balance, and he fell over the edge of the cliff. It is wonderful that he was not at once dashed to pieces but he appears not to have fallen precipitiously, but rathet to have rolled from point to point of the cliff until he came to the bottom, perhaps a hundred feet or more. He did not lose his senses, but was able to get on his legs, when he found that his right leg was disabled, and that he had sustained some internal injuries. As he did not come home, his grandson went up the road with a lantern to look after him and the poor old man called to him from the beach to come to his help. The boy instantly fetched his father, with whose assistance he walked home. He complained chiefly of his leg, and the doctor,(Dr.Thompson of Bideford) was at once sent for, who, on examination, found that deceased had sustained a severe scalp wound, besides the fracture of one or two of his ribs, which had penetrated his right lung. He was able to give a full account of the accident, and continued sensible, and apparently recovering from his injuries. until Friday last, when, active inflammation of his lungs having set in, the poor man died. He was a very hale old man, of above six feet high, and but for this accident, bade fair to add to his already advanced years. The place from which he fell is not a public walk, but only a private path belonging to the Lord of the Manor. The deceased had always lived in the parish, and few men in his walk of life have attained as much respect or enjoyed so high a reputation among gentle and simple. His funeral, on Monday, was attended by most of the respectful parishioners, who expressed their sincere regret at his death, and their sympathy with the bereaved family.

AN AGED PAIR - A TRIBUTE OF AFFECTION

In a rude-built cottage by the sea
There lives an aged pair
Who through much toil and danger
Have reached to eighty four.

Their steps are growing feeble,
Their locks are silvery white,
Which tell us they are nearing
A home more fair and bright.

Serenity sits upon their brow,
Contented with their lot,
Their grateful hearts to God they raise
Within that humble cot.

Their children and their grandchildren
so often round them throng,
To hear the oft-repeated tale
Of days when they were young.

But soon - oh soon - the time will come
When earthly ties must sever
Their setting sun is sinking fast
To rise no more for ever.

Oh solemn thought the time will come;
How many hearts will bleed,
When following to the silent grave
Their much-beloved dead.

Printed in the Bideford Gazette 1871


This poem obviously refers to John and Mary Prance who lived with William his son, and Harriet. It was written the same year that John died, perhaps even as he lay dying after his accident. The age of 82 given in the obituary and on his death certificate however does not correspond with the age in the poem given as 84. Who was right?