Over the years many members of the Prance family have owned or had part shares in ships, in most cases their livelihoods depended on them. In many cases we know very little about them but in some we know a great deal about the ships themselves, those who sailed on them and the adventures in which they were involved. The information in this section has been gathered by Christopher Prance with assistance from the North Devon Maritime museum in Appledore which has access to records for the area and has researched the local maritime history. The following are those we know about so far.

Note - All dimensions in the information below are in feet and inches but are given in decimal measurement i.e. One foot is still 12 inches but each foot is divided into 10 divisions. For example a length of 65 feet 6 inches is recorded as 65.5 feet.

The JOSEPH was a Brig built in Pilton in 1788. It was a carvel built vessel but other details are scarce. The JOSEPH was a cargo ship that plied between Europe and North America. It carried just two guns and a crew of 15. On 21st May 1793 she sailed from Norfolk Virginia under the command of Captain Thomas Prance (1768-1837) laden with wheat bound for Barcelona. The following day she was attacked by the French privateer SANS CULOTTE boasting 10 guns and a crew of 40. Eventually, after 3 days of fighting, the JOSEPH was boarded and taken. A full account of this action and the role played by Captain Thomas Prance is told elsewhere. 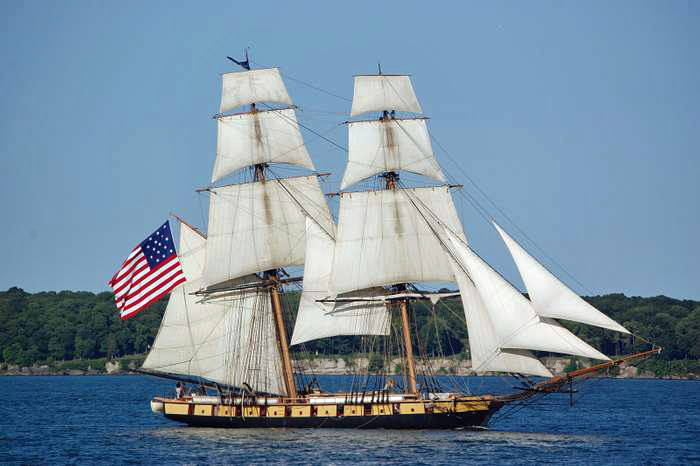 At 297 tons and carrying 20 guns the USS Niagara was about twice the size of the JOSEPH. The original vessel was built in 1813 and in the same year served in the Battle of Lake Eirie against the British. The current USS Niagara is a reconstruction using a few timbers salvaged from the original.

The MARY JANE was built in Appledore in 1849 by George Williams the younger. It was a carvel built vessel with a square stern. Originaly registered in Bideford in 1849 it was mastered by John Braund and then James Boatfield Williams. On 25th April 1854 George sold the MARY JANE in equal share to John Prance (1789-1871), mariner of Peppercombe and his son William Prance (1821-1907), mariner of Bideford. The vessel was then re-registered in Bideford in May 1854. In March 1866 John and William sold the MARY JANE to James Ley, C.hairman of the Bideford Deep Sea Fishing Company. Little else if known other than she was eventually broken up in Africa.

The GEM was built in Coombe Martin in 1843. It was a carvel built vessel with a square stern. The Bideford Register shows that on 18th April 1859 it was jointly owned by Joseph Prance (1834-1912), mariner of Peppercombe and his cousin Thomas Braund (1836-?), mariner of Parkham. In 1860 Thomas sold half of his share to his cousin Athaliah Prance (Joseph's sister) and the other half to James Glover, fishdealer of Parkham. In March 1867 James then sold his share to Joseph. Athaliah died in March 1872 and her share then passed to Joseph leaving him as the sole owner. By 1881 Joseph had opened his own fish shop in Bideford and eventually he sold the GEM to Philip Beer Jones, mariner of Bideford in May 1890. So far as the GEM was concerned fate then intervened as shortly after, on 18th December 1890 she was lost following a collision. The loss was reported in The Bideford Gazette of Tuesday 23rd December as follows:

Collision in the Bay
The Bideford trawler GEM was run into and sunk off Bideford Bar by the F.A.M.E of Barnstaple on Thursday night.The GEM owned by Philip jones of Bideford left port on Thursday morning to go trawling in the bay. The wind however increased during the day and by the evening when the trawl was lifted it was blowing a gale. The GEM then had to wait for the tide in order to cross the bar. Attached to the Braunton lighthouse is a tide signal to assist vessels as to when to cross the bar. By day a half-tide ball is raised and by night a light is used; it was while waiting for the tide signal that she was run into by the F.A.M.E. and nearly cut in two. The three crewmen managed to jump aboard the F.A.M.E before their own vessel sank. The F.A.M.E. which was bound to Fremington with a cargo of coal landed the men onto the bank of the River Taw, from where they walked back to Bideford.

The PEARL was built as a herring fishing boat in 1883 in a yard close to Bideford Bridge. For many years the vessel was owned by Captain Fred Prance. Subsequently until around 1926 the PEARL was under cutter rig for pleasure cruising and trawling, mostly at Ilfracombe then at Clovelly. She then spent 7 years barging gravel in the River Taw under a sloop rig. The last record of her is through an appeal in the North Devon Weekly Gazette to save her as the last remaining example of a Clovelly herring boat. By this time she was laying abandoned at Fremington Pill and there is no record of her ultimate fate. 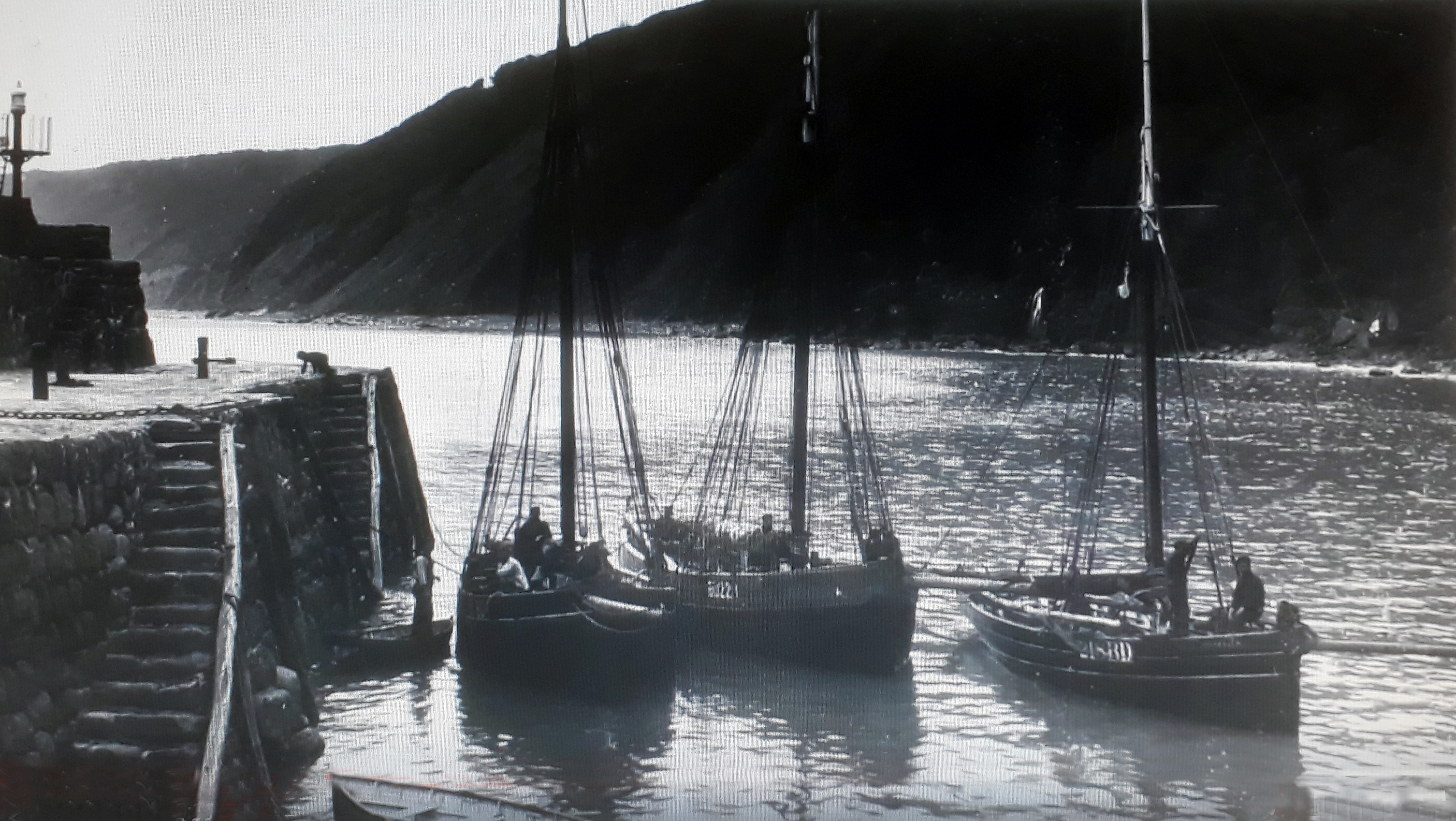 The local fishermen also worked smaller herring boats out of Clovelly. These were introduced in the 1850s and known as Picaroons. They were designed to beat the larger boats out to the shoals of Herring as they could get out earlier on the tide and also return sooner to market, hence realising a higher price for their fish. The name Picaroon originated from the Spanish word for rascal. 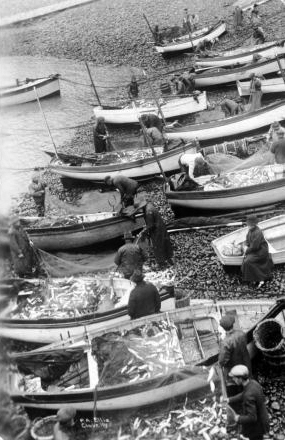 Picaroons drawn up on the beach at Clovelly