Bertram Prance was best known during the nineteen twenties and thirties for his humorous illustrations in Punch magazine also in the Humorist, London Opinion and many more.  His artistic gifts manifested at an early age while a pupil at the school of Art and Science in Bideford and he was very soon having his work published in The Tatler' and other popular story magazines and books.  His mastery of the pen was shown at its best in the delicacy of his black and white drawings and cartoons depicting the social mores of the period and in the various characters he drew whether it be a  snobby hostess or a weather beaten and threadbare tramp. All captured with a delightful sense of humour.  He was elected a member of the Savage Club, the foremost arts club in London, where he was to meet other artists at the top of the stage, music and literary professions. He was also an active member of the London Sketch Club situated in the Marylebone Road where many practicing commercial artists gathered once or twice a week for work and entertainment.  Friday nights were always work nights where often the pictures drawn and painted were swapped.  He was elected President of the Sketch Club in 1948. In the 1930's he illustrated the books of Anthony Armstrong, one of the 'Punch' literary contributers, and post war the Lone Pine series of books for children by Malcolm Saville. These latter books have remained extremely popular to this day and are now valued by collectors. A life long friend of his was B.C.Hilliam, Flotsam of the Flotsam and Jetsam singing duo popular in  the 1930's and he illustrated several of B.C.'s books. During the 1940/45 war, like every one else, Bertram's work was seriously disrupted and his cartoon work never recovered.  After the war he was still in demand for book illustration and advertisements but following a serious illness he gradually turned his talents to painting.  He worked in guache and oils and was prolific in his output; he loved the countryside, the skies, coasts and seashore which were such a prominent influence in his younger days.

One of five children Bertram Prance was born on December 5th 1889  in Bideford, North Devonshire.  His father was well known locally as Captain Prance, skipper of his own fishing trawler 'Deera', which was one of many fishing vessels bringing their catches to the quayside in Bideford.  The sea and the skies, therefore were very much part of the visual experience of the young Bertram. Apart from a brief period during  the war when he returned to Bideford most of Bertram's adult life was spent on the Surrey/Sussex border where he had bought some land. The house he designed  and had built for  himself and his young family was in the village of Rudgwick and he named it ‘Chudleigh’. A lovely garden with a tennis court was laid out by him with the help of one gardener but 1n 1940, like many other largish houses, Chudleigh was requisitioned by the army and altered so much that when the war ended he never had the heart to return and it was sold.  W.Heath Robinson was a near neighbour and they became good friends.  After a short spell in Hampstead post war in 1952 he bought the west part of Campfield Place on Leith Hill, Surrey which was to be the family home until it was sold in 1983. Many of his paintings are from the Leith Hill era.

Bertram Prance came from a long line of North Devon Prances whose great-grandfather was John Prance of Peppercombe, the one who fell over the cliff there and died from his injuries in 1871. He married Kate Macfarlane from Barnstaple in 1915 and had two children.  He was greatly interested in the foundation of the Burton Art Gallery in Bideford just after the war. This gallery has been much enlarged and modernised since and his son arranged  a comprehensive retrospective exhibition of his work there in 1998.  The 'Burton' has a number of his drawings and paintings in its permanent collection. 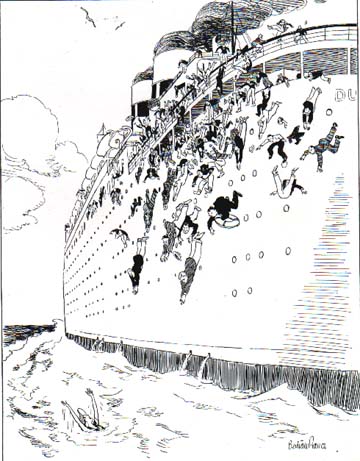 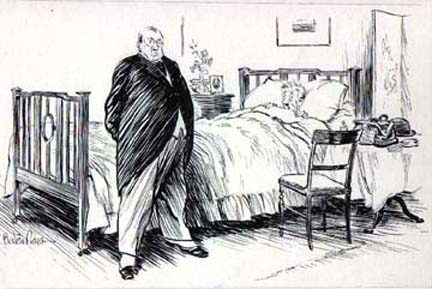 Purturbed patient:  "Poisoned doctor? But how?"
Doctor:  "Oh, the post mortem will explain that ."